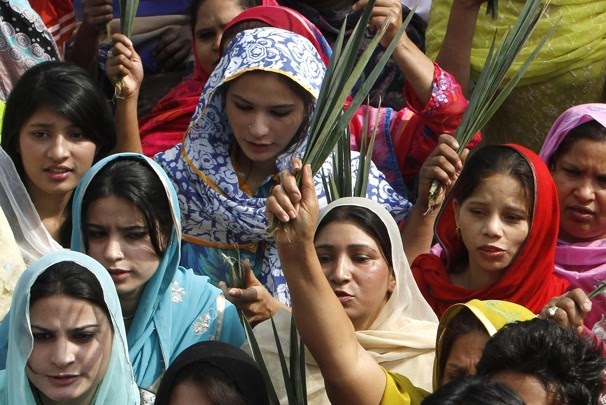 “Why do you look with hatred, O many-peaked mountain, at the mount that
God desired for his abode, yes, where the LORD will dwell forever?”
(Psalm 68:16)

A group of armed men in Pakistan vandalized a church in Punjab province in early May.  Police said the group desecrated a cross and demolished the gate and boundary wall of the church in Kala Shah Kaku town, some 40 km from Lahore, the provincial capital. The alleged cause was a land dispute — the group told Christians to vacate the church land, claiming it belonged to them.  Church leaders lodged a police complaint following the incident.

The incident occurred as the independent Human Rights Commission of Pakistan pointed out in their 2019 annual report that Christians have continued to suffer forced conversions and persecution under the country’s blasphemy law.  The report noted particular cases of forced conversion in Sindh and Punjab provinces.  In Punjab, 14-year-old girls had been forced to convert and to marry.  In Sindh, the families of two Hindu girls claimed they had been kidnapped for marriage and forced conversion.  According to human rights NGO International Christian Concern, at least 50 Christian women and girls faced this issue in 2019.

The ongoing coronavirus pandemic has not reduced discrimination against Christians in Pakistan.  Authorities have apparently denied food supplies to them by claiming they were meant for Muslims.

Christians in Pakistan often face religious hatred and discrimination.  The country’s blasphemy law is controversial because it is often used to persecute Christians and other religious minorities, with consequences for their places of worship and residential areas. Blasphemy against prophets of Islam is a capital crime in Pakistan.  According to Open Doors, a mission supporting persecuted believers, Pakistani Christians are afraid to express their faith freely in case something they say is interpreted as blasphemy.  False accusations of blasphemy have led to imprisonment or even killings.

Christians constitute around two percent of the population in Pakistan.  Christian communities remain among the poorest sections of society, often do menial jobs, and are regarded as second-class citizens.  Three cities, Karachi, Lahore and Faisalabad, have large Christian populations.

Pakistan is currently fifth on the World Watch List, an annual report by Open Doors.  It is considered a country where extreme persecution of Christians takes place.

We ask your blessings for the people of Pakistan and especially for Christians who are suffering from persecution there. We pray for the church in Kala Shah Kaku and its pastor and congregation.  May they be strong when faced with violence.  We pray for those imprisoned or suffering unjustly from the blasphemy law. We pray that you will help the people who practise violence to see the light and that way is not the answer. We pray that your Holy Spirit will descend on this community and all of Pakistan and cleanse it of religious and other persecution.

Especially in these times of the coronavirus, we pray that people will come together rather than pull apart. We need your spirit of peace and strength to get through these difficult times. We pray that your Holy Spirit will help the government and people of Pakistan turn it into a country where extreme persecution no longer exists. We pray that all will work together in peace and harmony to deal with the coronavirus and all the other ills which affect the country.

Watch over your flock in Pakistan and bring them safely to a land of peace and harmony.  May your Spirit comfort them and keep them safe from persecution and the coronavirus. We need your help and guidance in all we do.