“The Lord is my light and my salvation — whom shall I fear? The Lord is the stronghold of my life — of whom shall I be afraid?  When evil men advance against me to devour my flesh, when my enemies and my foes attack me, they will stumble and fall. Though an army besiege me, my heart will not fear; though war break out against me, even then will I be confident.”            (Psalm 27:1–3 NIV)

Local officials in the Central Java province of Indonesia have obstructed the completion of a Baptist church building for the past six months. The officials refused to grant the required permit for completion after local Muslim residents opposed the construction in the Tlogosari area of Semarang, the provincial capital. Last year, the government asked the church to collect more than 60 signatures indicating approval from local residents, but even though the church collected 84 signatures, construction was still halted.

With no resolution in sight, the Baptist church has decided to take legal action to resolve the dispute. “The reasons for the rejection are changing, starting from falsified signatures, expired IMBs (permits) until finally, the residents’ refusal does not touch the issue of principle permits,” the church’s attorney, Zainal Arifin, said. Pastor Wahyudi of the church added, “We will continue to fight for this because if left unchecked it will set a bad precedent for freedom of religion and worship in Semarang.”

Last year, a local chief revoked the permit for a Pentecostal church in Indonesia’s special region of Yogyakarta after radical Muslim groups from the area made protests and threats. The official said the permit previously issued to the church did not meet requirements established by a 2006 joint ministerial decree regulating the construction of houses of worship. The church’s pastor, Tigor Yunus Sitorus, said he then asked members to attend services at other churches. In January, an agreement was made that the church would move to another village.

Religious tolerance in Indonesia has come under threat. In May 2018, a court in Tangerang, Java, sentenced Rev. Abraham Ben Moses to four years in prison for religious defamation for sharing his faith with a Muslim driver. And while Indonesian Muslims are generally seen as tolerant and moderate, radical Islamic groups have been seeking to promote a violent version of Islam.

Dear Heavenly Father, we lift up the persecuted church in Indonesia to you. Please give your sons and daughters there an extra dose of your strength, perseverance, peace, hope and faith, that they will stand strong against the forces of oppression. Lord, please touch the hearts of those who would seek to block the spread of your Word by halting construction of churches, and in other ways persecute your followers. Please convict these oppressors of the error of their ways, and help them to see you through your faithful sons and daughters as the one true God. Unite the divided land as only you can, Lord, as one family, all belonging to you. In Jesus’ name we pray. Amen.

SRI LANKA: Continued harassment of Christians and fears for the future 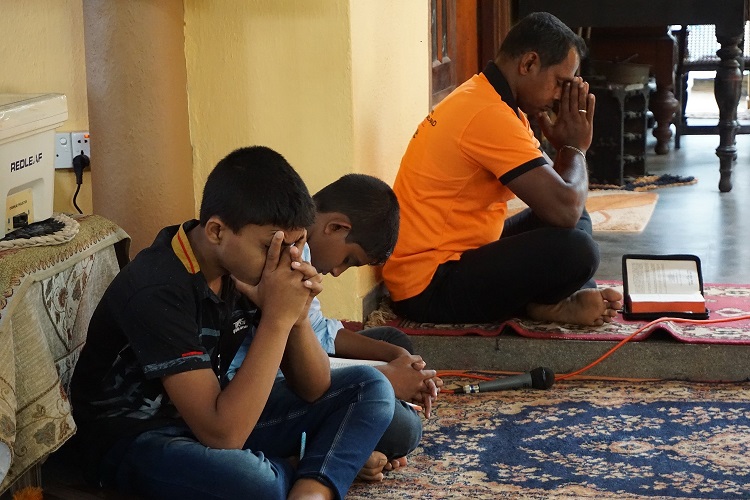 Christians in Sri Lanka have continued to face attacks in 2019. According to the National Christian Evangelical Alliance of Sri Lanka (NCEASL), there have been 83 recorded incidents in the country, including harassment by officials, abuse, and attacks.

In October, a Divisional Secretary, along with an officer of the Deniyaya police station, questioned a pastor about the legality of his church, the Hokma Bible Centre. They urged him to obtain authorisation from the Divisional Secretariat to conduct religious activities, even though the church has been operating at the location since 2007 and the pastor has valid papers for it. Until then, they demanded an immediate end to all services. They also insisted that they should be informed if any church is functioning in the area.

Attacks on Sri Lankan Christians came as Gotabaya Rajapaksa, the candidate representing Sri Lanka People’s Front, the Sinhalese-Buddhist nationalist party, won the presidential elections in November. This took place amidst some of the worst political instability and violence the country has seen.

In a speech soon after he was elected, Rajapaksa called for future cooperation: “Even though I knew I could win the presidential election with the support of the Sinhala people alone, I made a special request to Tamil and Muslim people to be partners in that victory. But their response was not to my expectation.” He continued, “But as your new president I ask you again to rally around me as true Sri Lankans for the sake of the future development of our country.” Sinhalese-Buddhist nationalists hope Rajapaksa will usher in another golden era for the nation’s ethnic majority.

“We built an ideology that the country needs a Sinhala leader who does not bend down in front of minorities,” claimed Galagoda Aththe Gnanasara, a monk and nationalist leader of Bodu Bala Sena (Army of Buddhist Power), a Sinhalese-Buddhist nationalist organisation responsible for several anti-Christian and anti-Muslim riots that went unchecked and is alleged to have the protection of the Rajapaksa government.

Many are justifiably worried about what Rajapaksa’s election will mean for religious harmony in Sri Lanka. Buddhist nationalism and violence against Christians have increased in recent years. Earlier this year, self-radicalised Islamist extremists bombed hotels and churches during the Easter Sunday attacks, killing more than 250 people.

We pray for your children in Sri Lanka. We pray that the new government will speak out and take action against those who persecute minorities and those of other faiths. We ask that acts of violence and harassment against our brothers and sisters in Christ in Sri Lanka end. We give thanks for the faith of our brothers and sisters in Sri Lanka who have continued to praise you and worship you and spread their faith in the face of persecution and harassment. We pray that those who preach hate against minorities and those of other faiths will be silenced and Sri Lanka can be a place of religious freedom and ethnic peace.

We remember the violence and destruction which took place in a terrible civil war and pray for the victims of that period and those who still suffer its consequences. We pray that we will each love our fellow human beings for you have created us all in your image.

May the Christian message of peace spread throughout all of Sri Lanka and the rest of Asia wherever Christians face persecution. We give thanks for your steadfast love which sustains us through all the difficulties we face in life. We pray that you will watch over our brothers and sisters in Sri Lanka who are doing your work and sharing your message for the benefit of all.